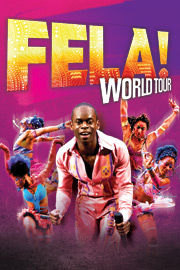 If money weren’t an issue, my one indulgence would likely be the theater. The Minneapolis-St. Paul area is rich with theatrical and musical options–I’d love to experience them all! So, when I was given an opportunity to attend the opening night of Fela! at the Ordway in St. Paul, I jumped on it.

I’d never heard of Fela! before this weekend, but the images splashed on their Broadway production website certainly made it look colorful and exciting. In that respect, it didn’t disappoint.

From the first explosive, energy-driven number to the last, the audience was swept along in a sea of rich color, music, and dance that rarely took a break, all while telling the oft-turbulent story of Fela Kuti, an activist-musician in troubled Nigeria (during the 70’s). (Read more about Fela Kuti <here>).

The costumes were imaginative and colorful, the dance numbers were often-frenzied, and the musicians phenomenal. My favorite numbers by far, though, were delivered by female performers Melanie Marshall (Funmilayo, Fela’s civil rights activist mother) and Paulette Ivory (Sandra-a woman Fela met in the United States, who inspired his activism). Their numbers provided a much needed break in the musical’s cacophony. Both women had rich voices that I would have loved to experience more of. Melanie Marshall’s emotive delivery of the number *Rain* was breathtaking as she demonstrated an amazing vocal range.

The performance wasn’t without issues though. It was so loud and unstopping that my guest and I both left the theater with a headache. The play seemed overlong too, perhaps because of the volume. I wouldn’t not recommend the show for children either as course language was often used.

Thank you to the Ordway Center for the Performing Arts for providing this opportunity!