Yeah I know it’s Saturday, and I usually only blog on Tuesday, Thursday, and Friday, but I just had to tell you about the play we saw last night: Elf The Musical on Tour at the Ordway Theater in St. Paul. I attended with my oldest son, but the entire family would have enjoyed it. In fact, families of all ages would have loved it. 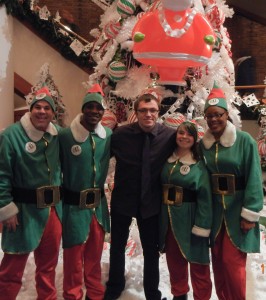 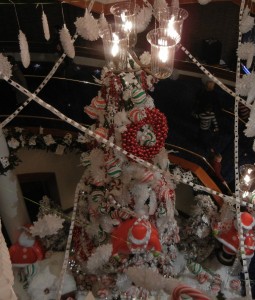 It was truly a perfect night to see a Christmas play. Rice Park (directly across from the Ordway) was lit with white twinkle lights and a colorful Christmas tree, and snow was lightly floating down adding a wondrous ambiance to the evening. The magical scene continued inside the Ordway with piano music, a Christmas tree, and colorful cut-out snowflakes, all setting the tone for the play.

The show begins at the North Pole with a humorous prologue by Santa, then scene one explodes with exuberant singing and bright colored costumes and backdrops. I was smiling from the very first line.

Perhaps the most touching musical number was “I’ll Believe in You” performed by Michael (Connor Barth) and Emily (Julia Louis Hosack), Buddy’s step-mom. The song is their letter to Santa saying all they want is one day with Walter (Drew Pulver)–Buddy’s father. If they get that, then they’ll believe in Santa again. It’s a song that pulls nicely on the heart strings.

Admittedly, the second act lacked the luster of the first. The sets were grayer, the story line darker, even some of the language was inappropriate for small children. But the ending number, “A Christmas Song”, returned the sparkle to the play.

Thank you to the Ordway for providing tickets so that I could give an unbiased review of this play.