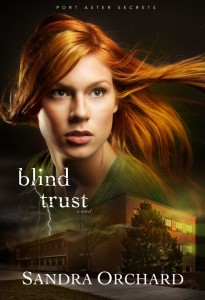 Back in April, Author Sandra Orchard introduced me to the concept of character interviews on her blog when she interviewed Richard from Chain of Mercy. It was so much fun, I had to return the favor! It’s a terrific way to get more insight into the characters in a novel, hopefully convincing you to read the book. 🙂

So today I’m introducing you to Kate Adams from Sandra latest, Blind Trust (Port Aster Secrets series from Revell). First, though, here’s a blurb about the novel:

Kate Adams had no idea she was carrying counterfeit money, and she can’t believe that it came from her sweet neighbor. Or that it lands her in the middle of another one of Detective Tom Parker’s investigations. Determined to prove her neighbor’s innocence, Kate stumbles into a pit of intrigue that is far deeper than a two-bit counterfeit operation–and strikes too close to home for comfort. As family secrets come to light, her world–and her budding romance with Tom–begin to crumble. To Kate, it’s clear that she won’t be safe until she uncovers all of Port Aster’s secrets. But is it too late for her and Tom?

Intrigued? I knew you would be! Now, on to that interview…

1. Kate, tell us a little about yourself and how you came to be in the midst of such suspense.

My name is Kate Adams and I was just trying to help out my elderly neighbor by picking up a few groceries for her at the store. I had no idea the money she gave me to pay for them was counterfeit, and I’m sure she didn’t either. Thankfully, Detective Parker knows me and knows I would never try to pass counterfeit money. Why would I? I have a good job as a research scientist specializing in herbal remedies. Unfortunately, he’s not nearly as certain about my neighbor, which is why I knew I had to step in and help find the real counterfeiter. Except…I’m afraid there’s something much more insidious going on here in Port Aster, and somehow, I’ve wound up entangled in the middle of it.

No, my family is all gone. My dad died when I was young, while in custody, soon after the company that now wants to partner with my research station had him arrested for stealing company secrets. I’ve never wanted to believe he was guilty, but since my mom changed our names and shipped us across the country to live with my gran, it had seemed that way. Recently, Detective Tom Parker helped me find the courage to look into what really happened twenty years ago, and although we’re having a difficult time getting answers, it has been nice to finally be able to share my secret fears with someone after all these years. 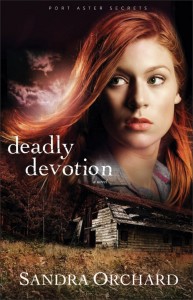 3. You’ve mentioned Tom Parker a couple of times now, as if he might be a friend. Or maybe more than a friend? But I’m surprised. Didn’t he arrest you for murdering your mentor a couple of months ago? I seem to remember reading about that in Deadly Devotion.

Well, yes, he did. But he felt really, really bad about it afterward. And it wasn’t as if he’d wanted to. He’d been compelled to by his boss when he found certain evidence in my research lab. I have to admit that after all that and the other stuff you probably read about in Deadly Devotion, I did avoid Tom for a long while, because I knew he’d have to testify in the upcoming case against the person who tried to kill me and I figured the defendant’s lawyers would rip him to pieces on the stand if they found out he had a relationship with the victim.

4. But now the two of you are together?

Um, it’s kind of complicated. Tom would like us to be, but… I’m sorry. I really can’t talk about it. It will make much more sense if you read my story.

5. It sounds so noble to try to uncover who’s behind the counterfeiting and other odd things going on with your neighbor. Aren’t you afraid the real bad guy might come after you?

Yeah, actually, someone in a silver Ford Escort has been following me. Tom is totally freaked out about it, which is making me even more paranoid.

6. Some have suggested that your stalker might be connected to your rather vocal opposition to GPC Pharmaceuticals partnering with the research station. Care to comment?

I’d hardly say I’ve been vocal about my opposition. I didn’t write that letter to the editor, if that’s what you’re thinking. Someone else sent it and signed my name. But yes, I’m wary of GPC’s motives. Wouldn’t you be wary of a company that cost your father his life?

7. What are you afraid they’ll do?

Squash my research. I believe that we may have a cure for depression, but GPC doesn’t care about curing people. They only care about producing products that control symptoms, so patients will be dependent on their drugs.

I think he’s starting to see that my instincts are good.

9. I think he thinks that there’s lots about you that’s “good!” So tell me, what do you value above all else?

Loyalty. Friends you can count on no matter what.

10. What do you hope people will learn from your experience?

Tell the truth, even when it hurts.

So, now that you know more about Blind Trust, I’m certain you’re going to run right out to purchase it, so here are a few place you can find it: 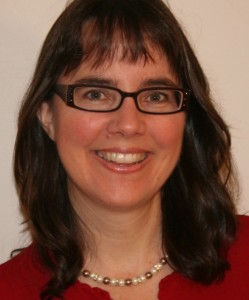 Sandra Orchard is the award-winning author of several inspirational romantic suspense/mysteries, including Deadly Devotion and Blind Trust. Her Love Inspired Suspense titles have garnered two Canadian Christian Writing Awards and a Romantic Times Reviewers’ Choice Award. Sandra has also received a Daphne du Maurier Award for Excellence in Mystery/Suspense. In addition to her busy writing schedule, Sandra enjoys speaking at events and teaching writing workshops. She lives in Ontario, Canada. Learn more about Sandra’s books and check out the special bonus features, such as deleted scenes and location pics, at https://sandraorchard.com.

Get in touch with Sandra: