There are several new releases for the month of October, but just a couple pique my interest.

John Otte’s latest addition to his Failstate series is a must read–I just hope I get to it before one of my kids or my husband. We tend to fight over John’s books. 😉

And I really enjoyed Patricia Bradley’s debut novel, Shadows of the Past (book #1 in her Logan Point series). I’m picky about what romantic suspense I read–don’t care for too much mushiness. Patricia’s first book seemed to have the perfect blend of romance with story and suspense, and I’m optimistic that book #2 will be the same. 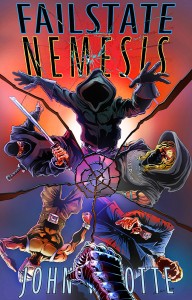 Abaddon will destroy you all!

But then Failstate learns a secret about his father. Rather than the loving family man he remembers, Failstate’s father was a criminal who got himself killed when he crossed the wrong people. Before he can process this new information, he receives a warning that a villain named Abaddon is coming to New Chayton. The message is all the more disturbing since it’s delivered by Lux. She died in Failstate’s arms a year earlier. How can she possibly be alive?

Those mysteries will have to wait, though, as Abaddon storms New Chayton, strewing death and destruction in his wake. But he’s not the only newcomer. Unusual heroes are appearing throughout the city.

Can Failstate get to the bottom of the reappearance of Lux, the influx of new heroes, and the truth behind his father’s past–all while keeping Abaddon at bay? Abaddon may prove to be Failstate’s greatest nemesis. But what will Failstate have to sacrifice along the way? 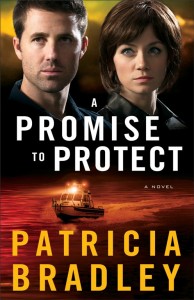 A PROMISE TO PROTECT
(Logan Point #2)
by Patricia Bradley
Revell

Acting Sheriff Ben Logan hasn’t heard from Leigh Somerall in a very long time, but it doesn’t mean he can get her–or their whirlwind romance of ten years ago–out of his head. When she calls out of the blue, it is with a strange request to protect her brother, Tony. When Tony dies just days later, Ben is charged with a different task–protecting Leigh and her nine-year-old son, TJ, from the killers. But how can Ben keep an eye on Leigh if she’s doing everything in her power to avoid him? And could the secret that Leigh is keeping change Ben’s life forever?