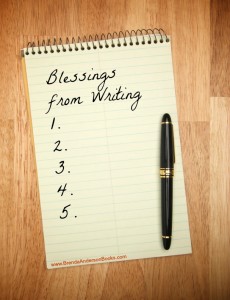 Last night at our ACFW Minnesota NICE meeting, fellow author Stacy Monson asked us to share blessings we’ve received from our writing. As I considered my answer, I knew there was much to be thankful for. Below’s an abbreviated list–I know there are many more.

What blessings have you reaped from being obedient to God’s call, be it writing or some other gift?