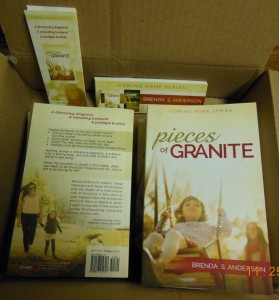 Sorry it’s taken so long to bring you the paperback version of Pieces of Granite, but I’d rather be a bit late with its release than to put out something that’s sub par.

I received the proofs right before Thanksgiving. They look beautiful! Problem was, once I started paging through a copy, I noticed a typo, then a formatting problem, and another formatting issue. Sigh. If those were all I found, it still wouldn’t have been acceptable to sell. So, over the past week, I’ve sat with the book, a pen, post-it tabs, and a notebook and read the entire book out loud. By the end, I’d discovered over 50 changes.

So now the re-edited version has been downloaded and I begin the process of waiting. Again. I happen to excel at waiting–not that I want to. Once approved, then I can hit that publish button, and I’ll shout it out! Hopefully later today …

On another note, Chain of Mercy received a very beautiful review yesterday from Miranda Uyeh on her To Be A Person blog, and I have to share it with you!