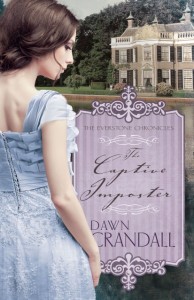 You got to meet author Dawn Crandall on Tuesday, now today, she introduces you to her heroine and hero from The Captive Imposter, Dawn’s newest release. But first, here’s a little about the story:

For her own protection following the murder of her brother Will, hotel heiress Estella Everstone assumes the alias of Elle Stoneburner and takes a job as companion to an elderly widow. Never did she imagine that her position would lead her back to her beloved Everston, a picturesque resort property tucked away in the rugged mountains of Maine. Living below her station in a guise of anonymity has its struggles, but her spirits are buoyed by a newfound friendship with the hotel manager, Dexter Blakeley. And his distaste for the spoiled socialites who frequent his hotel causes her to take a close look at her own priorities and past lifestyle. When Estella finds herself in need of help, Dexter comes to the rescue with an offer of employment she can’t refuse. As the two interact and open up to each other, Estella feels a growing attraction to Dexter; and increasing discomfort over concealing her identity. Yet, in spite of the false pretense she’s putting forth, she’s never felt freer to be herself than in his presence. But will he still love her when he learns the truth about who she is?

ESTELLA – She’s good at always doing what needs to be done, no matter if she likes it or not… this is a strength and a weakness, for it seems she’s lost herself in the expectations of others over the years. To the point she feels she isn’t truly known by anyone.

DEXTER – He is also very good at doing what needs to be done, but he does it as a way of life, with purpose. His main weakness comes in the fact that he won’t allow anyone into his heart. Although he lives valiantly and helps others in any way he can, he strives to keep himself closed off from feeling deeply for others.

Your inspiration for the character

ESTELLA  – Truthfully, the character came to be all on her own as I started writing books The Hesitant Heiress and The Bound Heart (the first two books in The Everstone Chronicles series). She’s has minor parts in those books, and is mostly a mystery to the reader. They know bits and pieces about her, but nothing solid. She really came into her own while I wrote The Captive Imposter from her first person point of view—and the main goal wasn’t just for me to discover her, but for her to discover herself.

DEXTER – I can’t deny that the character of John Thornton from North & South had a very strong influence in the beginning. I loved channeling all that broodiness into someone so misunderstood by most… but needed to get even deeper! I needed the reader, from Estella’s perspective, to inadvertently crack his walls and really get to know the man and why he behaved the way he did.

Background to the story (eg. What inspired your story idea)

Honestly, I didn’t know the whole story behind Estella’s words and actions in the first two books—they were just her being her, and I didn’t really know her yet. It was very interesting to finally find out what exactly had happened concerning the broken secret engagement between her and Jay Crawford, and specifically why it was that he seemed to want to hang on to the idea of being with her throughout the years without letting himself really give into her urgings to reconcile. The reader finds out so much more about Jay in this book, and why he could never be her hero. And I had so much fun figuring out who really was perfect for her—Dexter Blakeley!

I also finished writing this book while I was dealing with the emotions of being a new mom, and I think the whole “expectations of others/losing yourself in what needs to be done” part of her character arc really came through because of that. 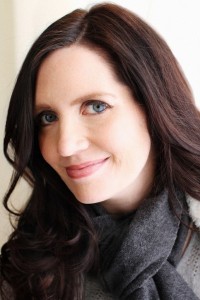 A graduate of Taylor University with a degree in Christian Education, and a former bookseller at Barnes & Noble, Dawn Crandall didn’t begin writing until her husband found out about her long-buried dream of writing a book. Without a doubt about someday becoming published, he encouraged her to quit her job in 2010 in order to focus on writing her debut novel, The Hesitant Heiress. It didn’t take her long to realize that writing books was what she was made to do. Dawn is represented by Joyce Hart of Hartline Literary.

Apart from writing books, Dawn is also a first-time mom to a precious little boy (born March 2014) and also serves with her husband in a pre-marriage mentor program at their local church in Northeast Indiana.

The Everstone Chronicles is Dawn’s first series and is published by Whitaker House. All three books composing the series were semifinalists in ACFW’s prestigious Genesis Writing Contest, the third book going on to become a Finalist in 2013. Her debut novel,The Hesitant Heiress, won the inspirational single title category of the RWA Gayle Wilson Award of Excellence in 2015!