Winner of a copy of Embracing Hope is … 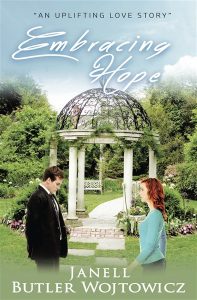 I recently had the privilege of endorsing Janell Butler Wojtowicz’s wonderful debut novel, EMBRACING HOPE. Janell writes the exact type of book I hunger for, with her broken characters, Christians who don’t always do the right things. It’s real life, not some fairy tale! Here’s my endorsement:

A captivating debut from Janell Butler Wojtowicz! EMBRACING HOPE is an engaging, intelligent story of grief, loss, and hope. I love that the romance between Drew and Allison developed organically and authentically. You will cheer for the couple as they embrace their pasts and look forward to the future. An evocative story you won’t be able to put down.

And here’s the back cover blurb:

Drew McKinley mourns his dead wife and still wears his wedding ring. Falling in love again is the last thing on his mind.

Even as Allison Bennett deals with financial hardships and academic challenges, she recognizes Drew’s unresolved grief from her own loss.

Chris Whitney carries around the secret burden of a dysfunctional family and a just-below-the surface temper.

What happens when they cross paths? Healing, hope or catastrophe?

Today, Janell’s introducing us to her hero, Drew McKinley with a short Q&A. I know you’ll love Drew as much as I do!

I’m here with Drew McKinley, the dean of students at Riley University in Omaha. We were actually going to talk last spring, but in light of your wife’s tragic death, you postponed, which was understandable. Thanks for rescheduling and your willingness to talk with me.

Drew: Thanks for waiting, and I’m pleased to tell you about Riley instead of myself, if you don’t mind.

Question: No problem. But can I ask a few basics? I understand you just started your second year here and you come from New Haven, Connecticut, right? New England is quite the contrast to Nebraska.

Drew: Yes, we’re—I’m from out East. I never thought we’d—I’d end up out here in the middle of nowhere. (thin smile emerges) I guess they call it the Great Plains, right? Omaha is a nice city; just a lot less trees than New England and flat.

Question: I imagine your work with 2,000 college kids is always a challenge, although I’m sure the fact you aren’t much older than them helps. Have they helped you work through your grief?

Drew (looking at his wedding ring and making a fist): Yes, they keep me very busy. They can be a handful; even Christian kids. (bigger smile) I shouldn’t call them kids; they’re young adults and they deserve that respect. I may be close to their age—I’m 30—but I’m also careful to exemplify leadership so that, on the flip side, I earn their respect.

Question: Tell me about your position as dean of students? What issues do you deal with?

Drew: Dorm disputes, of course (chuckle). Some personalities should never live together. Balancing budgets, which is always tricky. Dealing with university leadership, like the president and regents. Some disciplinary issues, but not many, which is good. We have required chapel and there are always those who think it’s a waste of time. But I tell them it’s only a half hour in the morning, and it’s a worshipful way to get your day off to a good start and get tuned in to God. (another chuckle) And make them listen to my lame announcements about not parking in the faculty lots.

Question: I understand Riley is considered an Ivy League version of a Christian college. How so?

Drew: It’s a combination of things. The average student gpa is 3.6. Graduation rate is 93 percent. Endowment is one of the highest in the country among Christian colleges. Our faculty—90 percent have Ph.D.s—come from more than just academia. They come from corporate finance, medical technology, biblical historians who have studied Egyptology, a former Congressman. Our student clubs range from robotics to a student-led music recording studio. And, we even have a competitive chess team. And they win—a lot.

Drew (rakes hand through his hair): Yes, an employee in my own office accused me of that. Job hazard.

Question: We hear a lot about the exorbitant costs of a college education and how students work more than go to classes, only to graduate with tens of thousands of dollars in loan debt. Are your students struggling, too?

Drew (sits up straight in his chair): Our financial aid department is keenly aware of all the options out there and works hard to make college more affordable for our students. Our career development department has considerable connections to thousands of job opportunities, both as work-study and after graduation. Our donors and alumni also step forward in hiring Riley grads.

Drew (squirms in his chair, runs his hand through his hair): Sorry about that. Um, (clears his throat) can tell you about a grad student, Allison, who works part-time in our office. She’s managed to get her undergrad degree while holding down two, even three jobs at a time. I have no idea when she finds time to sleep. (another chuckle) She’s managed to keep her loan debt lower than average with her jobs and aggressively seeking out scholarships and grants. It took her six years to get through undergrad, but she stuck with it and I greatly admire that. She’s even maintaining a perfect 4.0 gpa; I never could have done that.

Question: Tell me about some of your students; those who are special, with a lot of potential.

Drew: I’d hate to single any out, but the new student senate president, Chris, has taken the reins with a considerable energy and great ideas—like a 5K run at homecoming to raise scholarship money. He’s a charismatic guy with a lot of smarts (rolls his eyes) and very popular with the girls. I have confidence in the impact he’ll have not just at Riley, but after he graduates.

Question: So what are your plans for the future, Climb the academic administration ladder of success? Teaching? It’s a Christian university—do you see yourself in a pastoral or ministry role?

Drew (laughs outright): Me? A pastor? My mother would love it; my late wife, Kendra, too, who is probably championing my cause in heaven as we speak. My father has his eyes set on me following in his steps to VP, provost, even president somewhere. At this point, with all that’s happened since moving here I’m determined to focus on each day and do my part to see that our students enjoy their college experience and embark on successful careers while growing in their faith. Their success is my success.

Question: Thanks, Drew, for taking time from what must be a hectic schedule to visit with me. I’m sure you have a lot on your “To Do” list.

Drew (rising from his chair): Yes, prep for a back-to-back senate meeting and a budget strategy session with the administrative team. Quite the contrast in agendas—dividing athletic concession profits versus holding down the tuition increase to four percent. Thanks for coming.

Do you have a question for Drew? (Comment below & fill in Rafflecopter form for opportunity to win an ebook copy of Embracing Hope.) 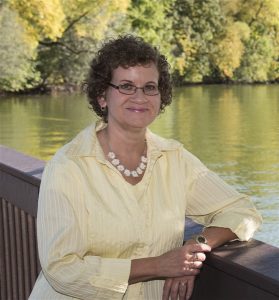 Janell Butler Wojtowicz, born and raised on an Iowa farm, was one of those kids who loved to write the dreaded “What I did on summer vacation” essay. It’s no surprise that she has spent her entire 30-year career in writing, including newspaper journalism, Christian higher education and nonprofit public relations, and local government public information. Much of her writing has been the “people stories” of trial, tragedy and triumph, which are reflected in her debut novel. Janell is a freelance writer/editor, and a member of American Christian Fiction Writers. She and her husband, Frank, live in New Brighton, Minnesota. She has two step-sons, a step-daughter-in-law and three step-granddaughters.

Janell has graciously offered to give away one ebook copy of  Embracing Hope. To enter, fill in the Rafflecopter form below.