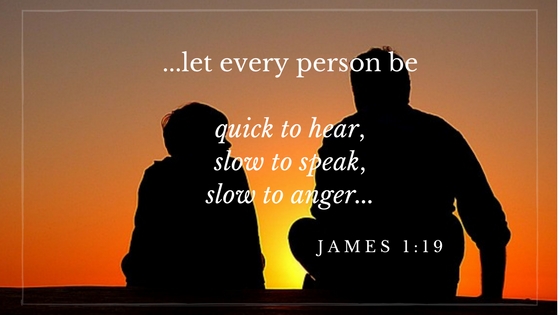 recently finished reading Crisis Shot, a thought-provoking book by Janice Cantore, a retired Long Beach, CA police officer. The story was about a cop who, in the line of duty, fatally shoots an unarmed teen. It was quite the hot-button issue for the author to tackle, but she did it very well, with grace, and I’d highly recommend the book.

Throughout the story, the heroine quotes rules that keep her grounded at work. A lot of wisdom is relayed in those rules, but one simple rule stuck out at me, because our society is doing a very poor job of it lately: Listen. Think. Speak. In that order.

Let’s break that down a bit.

Listen. That means don’t talk. Don’t interrupt. Don’t be thinking about how you’re going to reply. Don’t be doing other things while they’re talking. Rather, listen to their story. Hear their perspective. See the heart of the person that God sees. Don’t try to outshout someone. And absolutely do not call someone names because you disagree with them! When our kids were growing up, I taught them that the first person to call another person a name was the loser. That holds true for adults as well. So listen. Really listen.

“If one gives an answer before he hears, it is his folly and shame.”
Proverbs 18:13

Think. This goes beyond contemplation. This means do your research. If someone makes a statement about an issue, and represents it as fact, before spreading it around, first find out if what they stated is true. Oftentimes, what is shared on social media has some basis in truth, but does not give the entire story. Find out what the story is first before speaking out, before reacting. Then, setting your emotions and first impressions aside, contemplate what you’ve learned.

“A fool takes no pleasure in understanding, but only in expressing his opinion.”
Proverbs 18:2

Speak. Or, as I prefer to say, React. After you’ve listened. After you’ve thoughtfully considered/researched what someone has told you, now you can react to it. Keep in mind, though, there are ways to react that work better than others.

When I wrote my first novel, Chain of Mercy, I knew I wanted my heroine to be pro-choice. As someone who is staunchly pro-life, I also knew that portraying my heroine with any level of realism meant that I needed to listen to someone who held the same beliefs as my heroine., So, I took a friend out for lunch and asked her questions. I listened. I heard what she was telling me. And then I spoke by writing that heart into my character.

Did my friend change my mind? Not even close. BUT, she did help me understand the heart of someone who would make that choice. She helped me see the broken heart that God sees and only He can mend.

One of the most frequent comments in reviews for Chain of Mercy is that I presented both sides of the abortion issue fairly, and I helped readers see a perspective they hadn’t looked at before. Did I change any minds? Only God knows. I do know that I did my best to be fair, and I did that by listening first.

Listening, hearing, and becoming educated doesn’t mean you’ll change your mind, but it does offer the gift of respect to the speaker, and it just might open doors for you to speak as well.

It’s no surprise that the Bible has much to say about listening. To find additional Bible verses on listening, check out this webpage:
https://www.openbible.info/topics/listening_to_others