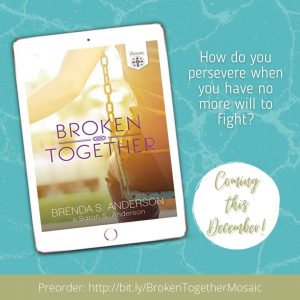 A number of years ago, I watched a news show (don’t remember which) where they interviewed a woman who was working with the Innocence Project to release her wrongly-incarcerated (so she believed) husband from prison. I recall being fascinated with her journey and her relentless fight over several years.

Finally, evidence was found that proved her husband’s innocence, and he was released from prison. Her persistence paid off.

Near the end of the show, the interviewer asked how they were doing as a couple now.

I remember sitting their shell-shocked. She’d fought hard for her husband to be released, how could their marriage not endure?

As a writer, I began filling in the blanks and knew I had I had to examine that question deeper in a story. It’s been many years coming to fruition, but at last the story is being written, and I’m realizing what a difficult journey the above-mentioned couple faced.

BROKEN TOGETHER will hit the shelves in December, but it’s currently available for ebook pre-order: AMAZON

“Therefore, since we are surrounded by so great a cloud of witnesses,
let us also lay aside every weight, and sin which clings so closely,
and let us run with endurance the race that is set before us…”
Hebrews 12:1 (ESV)

More from The Mosaic Collection…

Written in Ink (The Rose Tattoo Trilogy #2) by Sara Davison ~ Everything he has built his life and future on has been torn away.