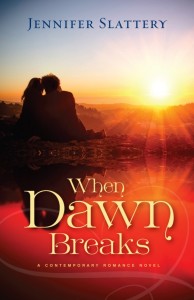 I’m pleased to welcome Jennifer Slattery today! Back in September 2016, I spotlighted her debut novel, Beyond I Do (Currently on sale at Amazon for less than $4 for ebook and print!), in a debut author post. In December, Jennifer’s sophomore work, WHEN DAWN BREAKS, came out, and I love the reviews it’s getting, saying that the story is very real, the characters authentic. I also love that the heroine is “older” in Christian fiction terms, with her having a grown daughter. So, this is just my type of read. While I haven’t read it, yet, it’s on my must-read list.

Here’s the back cover blurb:

As the hurricane forces Jacqueline to evacuate, her need for purpose and restitution propel her north to her estranged and embittered daughter and into the arms of a handsome new friend. However, he’s dealing with a potential conspiracy at work, one that could cost him everything, and Jacqueline isn’t sure if he will be the one she can lean on during the difficult days ahead. Then there are the three orphans to consider, especially Gavin. Must she relinquish her chance at having love again in order to be restored?

Sounds intriguing, doesn’t it? And to further pique your interest, Jennifer talks about her heroine, Jacqueline, in the interview below:

That’s correct. When we first meet her in When Dawn Breaks, she’s been a believer for about a year. Prior to that, she spent her life living for herself, which led to many broken relationships, the most painful of which is her relationship with her adult daughter. Delana, Jacqueline’s daughter doesn’t know or trust the “transformed” Jacqueline and harbors a great deal of resentment toward her mother. Jacqueline understands her daughter’s pain and is determined to regain her trust and rebuild their relationship.

I suppose her reaction was fairly common. It’s hard to believe a catastrophe will hit one’s area. This was true for Jacqueline. She’d been through storm warnings before, but they’d always resulted in little more than hype. So when the mayor of Crystal Shores issues a mandatory evacuation, she believes he’s overreacting. I suppose some of that stems from denial; she doesn’t want a hurricane to hit. A major storm would completely wipe out every she’d worked so hard to build, including her dream home, which she’d plunked the majority of her savings into.

There’s numerous reasons Jacqueline begins serving very early in the novel, the biggest of which is she wants something to occupy her time while she waits for the authorities to salvage what’s left of Crystal Shores. In addition, things between her and her daughter, who houses her post-storm, are incredibly tense, and Jacqueline wants an escape. The impromptu shelter opened in a local church basement provides a great escape. Serving—doing something physical—also gives her time to contemplate the rest of her life and what she wants to do with it.

Jacqueline is held back by deep feelings of shame and regret. She’s made some huge mistakes as a mother, mistakes she’s now paying for. But she’s also been saved and transformed by grace and giving the chance to live a completely new, God-centered life. Though she’s trying desperately to walk in that grace, whenever painful memories from her past resurface, her shame leaves her discouraged, insecure, and ineffective.

This is a great question. She’s never been very successful in the relational department, as I’ve already mentioned. And most of the men she’s dated have been selfish and shallow, though she didn’t realize how much so until she came to Christ. So in many ways, romance isn’t even on her radar, until she meets a handsome, godly widower named Jonathan Cohen.

Thank you, Jennifer, for giving us this added insight into Jacqueline. She sounds wonderfully real and relatable! I can’t wait to read When Dawn Breaks! 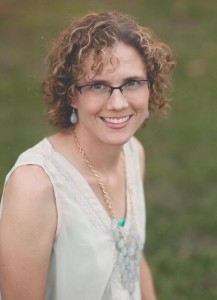 Jennifer Slattery writes soul-stirring fiction for New Hope Publishers, a publishing house passionate about bringing God’s healing grace and truth to the hopeless. She also writes for Crosswalk.com, Internet Café Devotions, and the group blog, Faith-filled Friends. When not writing, Jennifer loves going on mall dates with her teenage daughter and coffee dates with her handsome railroader husband.

Visit with Jennifer online at JenniferSlatteryLivesOutLoud.

Read a Free 36-page exerpt of When Dawn Breaks >here<