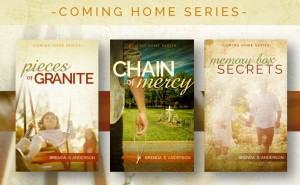 I’ve managed to confuse a few people with my latest release. Not the story itself, but rather with the order of release, with people wondering which book comes first, second, third. And which book would be best to read first. And so on. Hopefully, this will help clear things up.

The Coming Home series consists of four books, and chronologically the story time lines occur in this order:

So, why did I release them in a different order? The answer’s pretty basic: Chain of Mercy and Pieces of Granite were the most polished manuscripts. Chain was released first because, as it has strong elements of romance, it has a greater draw than Granite which is women’s fiction with no romance. Let’s face it, the majority of women like some romance in their novels.

Another question would be: Why is Pieces of Granite a prequel instead of Book 1? Because the book’s hero/heroine are different from the hero/heroine in the remaining three novels. Where Granite is about Debbie Brooks Verhoeven and her husband and family, Chain, Memory Box, and Finding Home are about Richard Brooks and Sheila Peterson.

One last question: Why write a story focusing on Debbie when the rest are on Richard? Well, that goes back to my early days of writing and trying to secure an editor and/or agent. I was consistently told that women didn’t want to read stories from the male perspective, and in Chain of Mercy, Richard is no doubt the lead. To counter the male lead issue, I decided to write a story from Richard’s sister’s perspective, one that would introduce Richard and pique readers’ interest enough that they’d want to read his stories.

So there you have it! Hopefully this straightens things out for you a bit!

A couple of other notes~ 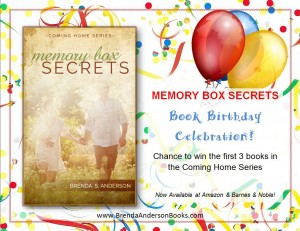 My Book Birthday Celebration is still going on (after a web host glitch took my site down mid-party!) Click on over to this post to join in and have a chance to win the first three books in the Coming Home series.

At this point, I’m still waiting for Kindle tech to download the correct version of Memory Box Secrets. Once it’s fixed, purchasers will receive the correct version, but in the meantime, please hold off on purchasing. I will shout it from the rooftops when they get it right. 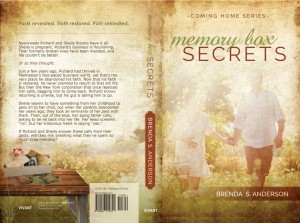