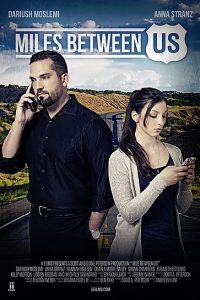 My husband and I had a very unique opportunity last Monday: we were invited to attend the Cast and Crew Screening of the movie Miles Between Us. No, neither I nor my husband were members of the cast and crew, but  … well, more about that later. First I want to talk about the movie.

Miles Between Us, about a father and daughter’s road to reconciliation, is the second movie written and produced by  Scott (and Diane) Peterson of iiFilms. The father has been divorced for several years, and during that period, instead of making more time for his daughter, he put more effort into building his business, thus paving an estranged and distant relationship with his daughter. When the daughter is about to head off to college, literally across the country, his ex-wife is injured and unable to make the trip. Instead she makes a plea to her husband to make the trip with hopes that the father and daughter will begin to close the distance between them.

Like any journey, their road trip isn’t without plenty of detours, roadblocks, and potholes, but those are the very things that eventually help pave the way for communication between the two. It’s a beautiful, inspirational story!

Check out the trailer …

Miles Between Us will be out in 2017. Likely January or February.

Now about that cast and crew invitation …

While my husband and I weren’t part of the cast and crew, my novel, Chain of Mercy was a *background* character or extra. Throughout the movie the daughter was reading Chain. Bits and pieces of the cover were shown, and pages were turned, mostly cropped or faded, but I could tell what the book was. 🙂 In a deleted scene (which I haven’t seen yet, but it will likely be on the video in the deleted scenes section), the daughter even reads an excerpt from Chain of Mercy.

Cool, right? So while the book hasn’t been made into a movie (which would be amazing!), it has been in one. I’ll take that. 🙂