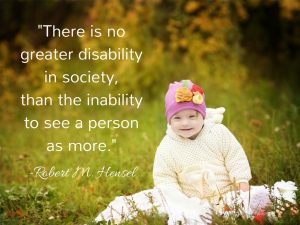 Many took to social media denouncing what happened, and rightly so. Others pointed fingers at those who weren’t vocalizing  their anger at what happened, claiming that those who remained silent were part of the problem. As this quote–often attributed to Dietrich Bonhfoeffer, but not verified–says:

Silence in the face of evil is itself evil: God will not hold us guiltless. Not to speak is to speak. Not to act is to act.

Which is why I’m going to share this article/video from CBS News (CBSN on Assignment) dated August 14, 2017: “What kind of society do you want to live in?”: Inside the country where Down syndrome is disappearing“.

According to that report, In Iceland, 100% of prenatal diagnoses of Down syndrome resulted in abortion.

According to this story, other countries are nearing the 100% abortion mark of those tested positive for Down syndrome. Denmark – 98%, United Kingdom – 90%, France – 77%, US – 67%. Now, that’s what I call evil. Horrific. Racist. Genocide.  Heartbreaking.

I can’t remain silent about that.

People with Down syndrome are still born in Iceland as not all pregnant women choose to take the screening test. But even the number who are tested is high at 80 – 85%.

What I want to know is, where is the outrage on social media? On the news? Why aren’t people screaming about this? Marching ? Protesting? Is genocide—“the deliberate and systematic destruction of a racial, political, or cultural group”, Merriam-Webster.com—not worth their time? Is it not equally as evil as what happened in Charlottesville? Is it too not worth denouncing?